While most graduates were exploring their newfound “freedom,” Derek Galloway headed off to boot camp to begin his journey in defending freedom for all.

Just under four years ago, Galloway joined the less than 1% of Americans who bravely volunteer to serve in our nation’s armed forces. Our country is currently in the longest war in its history.

Despite this, Galloway enlisted in the United States Air Force for six years, two years more than the minimum enlistment. His strong desire to serve compelled him to enlist, and this same selfless determination has led him to success early in his military career.

Galloway is often described as a quiet and humble young man with an appreciation for family, sports, and the outdoors. As a young child in North Idaho, he spent his time playing baseball. His high school years were spent hunting and fishing with his father and brother. His parents, Travis and Marcie Galloway, are both in public service in Coeur d’Alene. Perhaps inspired by their examples, Derek chose to begin his military career in Security Forces (Military Police).

While Travis and Marcie always knew Derek would be successful, they never could have imagined the distinguished career that lay ahead for their son.

For those who enlist in the Air Force as Security Forces, a demanding 65-day academy awaits them after basic training is completed. During the Security Forces Academy, trainees learn how to become effective members of the Air Force’s law enforcement team. Security Forces members also provide vital security for some of the nation’s most critical assets, such as nuclear weapons and Air Force One, the president’s aircraft.

On Feb. 14, 2017, the Galloway family said a bittersweet goodbye before sending their son off to begin his new life. Within six months, Derek had completed the Air Force’s basic training, earned the rank of Airman First Class (E-3), and graduated from the Security Forces Academy. What seemed like moments after earning his coveted badge and beret, Derek received orders for his first duty assignment at Malmstrom Air Base in Montana.

Malmstrom Air Base is a nuclear weapons facility located just outside Great Falls, Mont. As a Security Forces member, Derek’s job is to provide essential security functions for these critical assets. Remote locations, high-stakes assignments, and endless training regimens describe the lifestyle of those assigned to secure this base.

As a young man from the Pacific Northwest, Derek knew how to thrive in any environment. Derek quickly became a standout for his performance, and on Feb. 14, 2019, was awarded the rank of Senior Airman (E-4) “below-the-zone.” Below-the-zone refers to an anomaly in which an Airman is awarded their rank six months before they would ordinarily be eligible. Only 15% of Airmen are awarded this high honor.

On a continued path of success and service, Derek started a designated driver program on his base. After pitching the plan to his superiors, Derek began assembling a team of volunteers who offer free rides to military members in need of a safe ride home. Derek and his team take calls at all hours of the night to ensure their fellow Airmen get home safely and responsibly.

In the Air Force, Airmen typically spend four-to-five years earning the rank of Staff Sergeant. As noncommissioned officers, Staff Sergeants are the first supervisory tier in the enlisted member’s leadership structure. Not only must candidates possess the appropriate time in service and exemplary performance record, but they must also score well on a written test. On Sept. 22, 2020, Derek was informed that he had done the near-impossible feat of earning the rank of Staff Sergeant before serving four years!

As a part of the Air Force’s professional military education continuum, enlisted members attend Airman Leadership School (ALS). ALS prepares its students to become effective and influential leaders during peace and wartime settings. Students must successfully complete the 24 days of training when advancing to the rank of Staff Sergeant.

The highest honor given to an ALS graduate is the John L. Levitow Award. The John L. Levitow Award is presented to the Airman who possesses the most outstanding leadership qualities and scholastic achievements among his or her classmates. To be eligible for this prestigious award, the candidates must rank within the top 1% of their class. Only one person per ALS class receives this award.

John L. Levitow was an Airman First Class who in 1969 bravely risked his own life to save his fellow crew members aboard an AC-47 “Spooky Gunship.” After the aircraft was hit by enemy mortar fire, Levitow threw himself on a flare that had ignited and was about to explode. Levitow shielded the crew and aircraft from the imminent danger with his own body as he slid his way to the open cargo door. At the very moment that Levitow tossed the flare out of the fuselage, it detonated.

If not for the heroic acts of Levitow, this crew and aircraft never would have returned to its base that day. Upon landing, it was discovered that the aircraft had over 3,500 holes in it from the attack. While the entire crew was injured, they all survived, thanks to Levitow’s actions. On May 14, 1970, Levitow became the first enlisted member of the United States Air Force to be awarded the Medal of Honor, the military’s highest award for valor.

On Dec. 17, 2020, Derek attended his ALS graduation ceremony. The ceremony was steeped in military tradition and celebrated the achievements of a new generation of leaders. Prior to the conclusion of this time-honored tradition, one last award, the John L. Levitow Award, was given to the graduate with superior leadership qualities and academic achievements. Col. Williford, 341st Missile Wing Vice Commander, and Command Chief Master Sgt. Harper presented Derek Galloway with the John L. Levitow Award!

Although Derek’s military career has just begun, it has been remarkable, to say the least. His continued success speaks volumes of his character and commitment as he continues to serve this great country.

Derek’s family, friends, and community are all very proud of how he has made his mark in this world. In our nation’s uncertain times, we can all breathe a little easier knowing that our military has great leaders, like our very own Derek Galloway, moving up through its ranks. Congratulations, Derek!

Mike Willis is an outdoor writer from Hayden. He is a member of the Professional Outdoor Media Association and the Outdoor Writers Association of America. Mike has credits in Great American Wildlife, NRA Family, and he also has a story in press with BUGLE magazine. 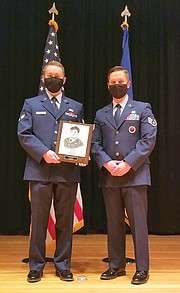